Bordered on the North by Rancier Avenue (FM 439) and on the South by Veterans Memorial Boulevard (Business 190), Downtown Killeen is centrally located in the heart of the city right outside of Fort Hood's East Gate. The historic core of downtown, listed on the National Register of Historic Places, is where the City's story began over 125 years ago. Come experience some of the original developments built in the late 1800s when the railroad first came to town. Visit the restored Santa Fe Depot now housing the Greater Killeen Chamber of Commerce, or take a stroll along Avenue D and imagine the City of Killeen's first hardware store, blacksmith shop, saloons and general stores. The streets were bustling with excitement and downtown had everything you needed.

The Downtown Killeen Plan (PDF) is a supplement to the Killeen Comprehensive Plan and designed as a how-to strategy on revitalizing downtown over the long term.

The purpose of the North Killeen Revitalization Program (PDF) is to promote the development and redevelopment of North Killeen. This program includes incentives for residential and commercial business structures' rehabilitation, expansion and/or new construction. The program has been adopted for a period of five years starting September 22, 2015.

Must submit an application (view) to the City;

Must not be delinquent in paying property taxes for any property owned by the owner/developer or applicant;

Must not have any City liens filed against any property owned by the applicant property owner/developer or must have initiated a payment program with the City of Killeen to include a 25% down payment against liens owed and payment schedule set.

Approval of the application and waiver of the fees shall not be deemed to be approval of any aspect of the project. All projects are subject to and must comply with all applicable local, State and Federal laws. Before construction, the applicant must ensure that the project is located in the correct zoning district.

Downtown Killeen is located in Tax Increment Reinvestment Zone (TIRZ) Number Two. The TIRZ Number Two is a designated area in the City that implements tax increment financing. This enables local economic development officials to collect the property tax revenue attributable to the increased assessed value resulting from new investments within the zone. The new revenue can be used to pay for redevelopment, infrastructure, and other community-improvement projects.

About the National Register

The Killeen Downtown Historic District has achieved listing in the National Register of Historic Places. The area has been recognized for its historical and architectural significance to the city and country.

The National Register of Historic Places is the nation's official list of cultural resources deemed worthy of preservation and includes more than 3,000 listings in Texas. Listing affords properties a measure of protection from the possible impact of federally funded projects, technical expertise and grant funds for restoration and preservation and federal tax benefits for rehabilitation of certain properties.

View more information on these boards and meeting agendas here.

The City of Killeen was accepted into the Certified Local Government (CLG) program by the United State Department of Interior in 2010. Killeen joined the ranks of only 66 cities and counties in the state to earn the designation. The CLG program is a local, state and federal government partnership for historic preservation. It is designed to help cities and counties protect a wide range of historic properties, from ornate churches to working-class neighborhoods, through high standards of preservation.

The program offers preservation grant assistance allowing city and county governments to develop and sustain an effective local preservation program critical to preserving local historic resources. Other benefits of the program include professional recognition, technical assistance and an information network. Since its designation in the program, the City of Killeen has been awarded three CLG grants that further the City’s preservation program through nominating the downtown district to the National Register of Historic Places, developing outreach videos on the history of Killeen, and conducting a city-wide historic resources windshield survey.

Find out what incentives are offered:

To list your available property/properties for sale or lease, located in the Historic Downtown District, please complete the Available Property Form.

For questions and more information, please contact the Revitalization Planner at 254-501-7641. 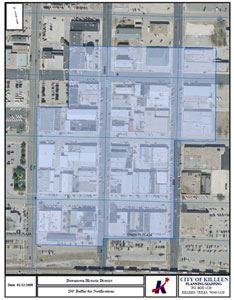